Me and the Biker are sitting here singing along to 'Papa Was A Rolling Stone' and laughing like idiots.  Is this how you envisioned your golden years?  I figured I'd be in a flying wheelchair on Moonbase Alpha or some shit.

I have a bad habit of being interested in too many things at once, and when that happens I have to do an information dump.  What this means is walking around the place doing chores and talking to an imaginary person about whatever comes to mind, just to get it out of my head already. This is just a private idiosyncracy, and I never gave it much thought.

As I was rambling around the apartment this afternoon talking away about What is there to say about the Rolling Stones that hasn't been said already, what constitutes soul, the mighty Hammond B3, Herbie Hancock, math rock, the invention of the theremin, Cement Music, how hot Pavrotti was before he became a ham planet, it suddenly occurred to me that, OMG. I now have upstairs neighbors! And the walls here are paper thin!

I'll tell them I was doing a podcast. Yeah.

Our former upstairs neighbors would have never noticed that shit. They were a busy group.  Two women, five children under the age of 12, one undercover dog, three regular gentleman callers, and one dude I'll call The Midnight Creeper.  It sounded as if they were juggling lawnmowers up there.  They were a happy group, thank God, no screaming fights or anything like that, but then again it wasn't me lying on my couch in the silence of the agricultural day listening to crows walk on the roof, either.

Goes to the kitchen.

50/50 chance of being treated to the sound of Creeper puking in the kitchen sink.

M.C. takes a shower. Then he takes a firehose piss. Flushes. Has animated, if muted conversation with unknown woman.  Fall into bed.  All sound ceases at 1:30am.

Life begins again for our two ladies and their children at 7:am.   In and out and all about, doing whatever it is they do at high speed while wearing Elton John shoes.

This all changed three days ago.  Come 9:am that morning an amazing changing of the guard took place as one group of people speed-moved out of that apartment and another speed-moved in simultaneously.

...but the little dog remains.

One of the unkindest things that can happen to a person is to stumble across Witness Money.

I've collected some over the years.  It used to come in the form of an Eisenhower or Kennedy dollar coin; now you've got Susan B and Sacagawea too. Steam polished aluminum. One side looks legit, the other side is a bunch of demented 'Come to Jesus, money is the root of all evil Moloch 666 only Christ can redeem, turn or BURN' stuff.

Lately it comes in the form of folding money, commonly given to waitresses instead of a real tip, or found on the floor in resale stores, or near the Mission. Isn't this a wonderful way to call poor people to the throne of the Lord?  Be short of cash, get pranked by a random stranger, get rebuked by fake money, and given a bible quote to make it all better.  Make me feel all churchy just thinking about it.

Our handyman is named Jake.  This guy is a mensch.  Friendly, not creepy, busy, competent, shows up on time, keeps the place looking sharp.  Super nice dude.

We're talking in the laundry room, just he and I; he's fixing the coin machine and I'm folding slogan t's. So many slogan t's. 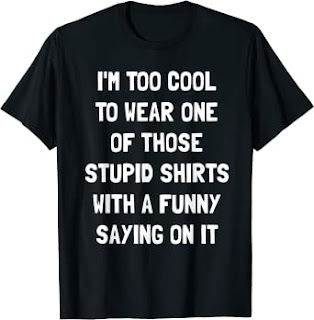 So very, very many slogan t's.

When he leaves, there on the floor is a folded bill.  I bend to pick it up, and sure as shit, there's Benjamin Franklin.

"Oh fuck no. Come on man, don't be one of these," I think, terribly disappointed, and I bend to unfold the bill.

I have a brick.

"oh shit," I think, all in lower case like that.

The next day he's striding past with a big sheet of fiberglass and I ask him "Did you notice you had something missing last night after we talked?"

I didn't get on well with paper thin walls - my neighbour at the time had a problem with loud wind - always spoilt my ambiance.
Meanwhile, I bet Jake was so relieved to get his money back, and yes, now you have a handyman for life!
Sx

We actually gave premature notice to our last landlady and moved house - in one of the coldest Januarys in years, AND I dug up the whole damned (frozen) garden to take with us - all because a fat Mama, fat Papa, two fat toddlers, and all their associated hangers-on (East Europeans always seem to have lots of "relatives visiting and staying over" - forever) moved in above us and subjected us to fourteen hours a day every day to what sounded like some very amateur rehearsals for the tap-dance numbers in 42nd Street. I sympathise. Jx

Ms Scarlet: That put me over on my side laughing! Oh my God, that would be HORRIFYING! You poor woman!

Awww, that was so righteous to return the dropped bill back to the guy. Most of the time when we find money it's legit and nobody in sight, who knows who dropped it, seems a lot of them are outside of areas with the new Pot Dispensaries... must already be high as Hell when they are putting their Money away? *LOL* I did find a hilarious 5 Mil Bill and kept it thinking it a Joke, your Post made me turn it over just now and see that, sho' nuff, it's Churchy... OMG I'm laughing my Ass off now... I didn't even know the Evangelists were pulling that shit... as if that would lead anyone on the Path to their Church being pranked like that! Bwahahaha. If they Cared so much about their Fellow Man and were Good Christians, wouldn't they be dropping real Cash on Purpose in Poor Neighborhoods for the less Fortunate to find and be like an Anonymous Charitable Cause? Just sayin'.

Jon: I have lived in the same neighborhood as that family. They broke into our cars and creeped our property numerous times. You'd see them out walking around the neighborhood as a pack, the whole family, at night during the summers. They were the notorious Kravicheks (sp?), a whole extended family of Ukranian hood rats that scammed their way into the US by hooking up with a local Christian outreach program that brought the whole notorious family into the country. Interpol knew all about them! They always had a metric shit ton of people coming and going. Their kids were part of a local gang called the West Side Tokers. The whole family used to break into vacation cottages and bucket brigade the belongings out to the family car, grandma, baby, grandkids and all. I literally saw this happening! Dad would be up top sawing off a length of insulated woodstove pipe and handing the segments down and away it would go. They had a huge 'compound' all walled off with wooden pallets. Instead of fixing their indoor bath, they chose to shit down the hole into the septic tank in the back yard (conveniently placed right at the side of the road so everyone could enjoy this) and eventually the state police had enough and came in three squad cars to bust them.
The WHOLE FAMILY swarmed the police en masse and were hosed down by three cops with pepper spray...grandma, baby, sonny, momma, baby and grandkids! Interpol and the Border Patrol got called in to the fooferaw and the upshot was they got deported to....guess. WYOMING. Wy fucking Oming. Which come to think of is kind of a fate worse than death, but still, why not send them back to the motherland? To this day I feel sorry for Wyoming.

Bohemian: EXACTLY! I've been finding this stuff since I was a little kid. I have about seven or eight 'coins' that I've found over the years. My favorite though? Remember MAD magazine? They used to have a cartoonist named Basil Wolverton. He used to draw the monster stickers in the 1960's that we all had on our bikes and stuff. Well, suddenly he Got God and quit MAD to draw religious tracts, the kind you'd find folded up and tucked into the window latches in the bus. Still in that 'monster sticker' style! Sinners in Hell all covered with warts, with freaky eyeballs and ears on their arms and stuff! Angels who were all squatty and had funky stubby wings... I used to keep them in my purse and re-distibute them around Portland because, if you're going to accept Jesus as your personal Saviour, it should be Basil Wolverton who lead you to the rail, was my thinking. They were absolutely bizarre and wonderful things.

I feel there's an excuse, if any were needed, for another "slogan t" - I Feel Sorry For Wyoming. Jx

Finally. Someone other than me who sits around singing 'Papa Was A Rolling Stone'.

I loved Basil's MAD Mag Art... just now googled his Religious Tract Art, after he found The Lord... yeah, that's some bizarre and wonderful stuff. What a fabulous Imagination he has, no matter who he's doing Art for.

The Mistress: Join us in an online chorus of "Shaft" sometime! Or exchange Blazing Saddles riffs. We're all dork all the time, rhymin' and slipslidin' 24/7 geriatric heaven, Chiquita!

Bohemian: OMG you looked it up! Isn't it the BEST???

We are twinning again . I wander round talking to Mr C,s dog Toby(who is not here) who comes and stays if Mr C is away. Toby is my bestest buddy so I chat away to him when I am on my own :)