And just who are they?  Asian motherfucking murder hornets.  They just found the first live nest in Blaine, Washington, which is entirely too close to where I live. 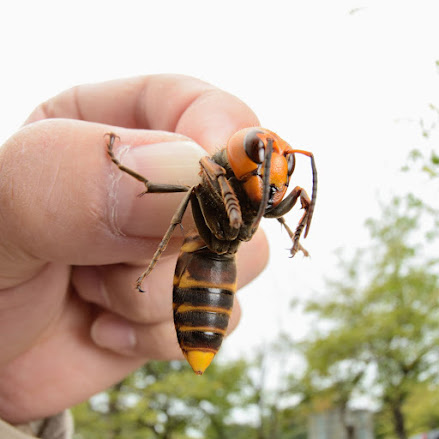 What exactly did this thing evolve to kill?  Water buffalo?  Why does this even exist???

Murder hornets don't murder people. They murder wasps and honeybees. Now me, I'd have a fuckin' heart attack if I saw one because they're the size of a goddamn field mouse, no lie; and scaring old ladies to death is manslaughter in my book.

Canada is doing it's part in eradicating them, and a hearty THANK YOU, CANADA for that.  But us?  It's complicated by the fact that up here in the Fourth Corner, there are Vast Tracts O' Land all along the border that are uninhabited. One the opposite side of the border, literally the width of a two lane road that is called, oddly enough, Boundary Road, it's pretty well suburbs and well-managed farms, right up to the line, but on this side it's forests, hillsides, and open fields.

The person who found the murder hornet here seems to have found it up underneath an overturned boat, from the photographs.  Blaine is a town on Puget Sound, and it has a fair sized population, but not everyone in Blaine is poking around underneath boats looking for murder hornets either.  I say GET ON THE FUCKING JOB, BLAINE.

I've done my part and have ever since the first mention of the issue.  I have also laid in a stock of wasp and hornet killer. I am not ashamed to use chemical warfare on these things.  Hornets are aggressive!  They will literally come after you for no good reason and sting you just to be assholes.  They'll even bite a chunk out of you!  No shit.  It's happened to me, I saw it happen to my husband, they will literally take a bite out of you and leave a bleeding hole, particularly if you've been sweating.  But stinging isn't good enough for them.  Blind rage isn't enough. Having a whole town in Washington named after them isn't enough. (Twisp, Washington - onomatopoeically named for the sound that hornets make flying in a swarm, which they do like mad bastards there in Twisp.) Flying isn't enough. They are insane flying megalomaniacs, and if they don't get you, their big brother WILL.

Native hornets do have their place in the grand scheme. They are pollinators. Yes!  And the wilderness would be tit deep in dead animals and deer shit and bear crap and old rotten trees without hornets.  Ever wondered why the forest is such a tidy place?  Hornets.  Then people came along and started building boats and turning them over and providing hornets with predator-free areas to build their nests. The murder hornet in Blaine was found snacking on a regular hornets nest up underneath that boat.  I don't know who to root for in that situation.

In the wilderness, hornets are kept in line.  They're basically snacks once the sun goes down.  They go dormant and just cluster up on on the outside of their nests.  A pine marten or squirrel or what have you comes along and gets a crunchy late night snack, like the wilderness version of ghost pepper Doritos, I guess.

There are no pine martens here at Rancho FirstNations, and damn few squirrels.  We get regular sized hornet nests in the eaves of the garage, in our cars up under the sheet metal (which is demented but who can divine the purposes of these fuckin' things?) and in our TWO SHEDS. Yes.  We have TWO SHEDS. Insert Monty Python jokes here!  TWO SHEDS BABY!!  RANCHO 'TWO SHEDS' FIRSTNATIONS!! SHEDS SHEDS SHEDS!  IT'S SHED MADNESS!!!!!!!!!

Where was I.  Oh. Hornets.  So we get hornet nests, and we destroy hornet nests, and they build them again, and we destroy them again.  Come August, you better have destroyed those hornet nests and cleared them away completely, because something about the month of August really pisses hornets off .  I don't know why it is, but it is, and it's a damn fact.  They are everywhere and they are all in an insane rage about something.

Now supersize all those propensities.

You got you a Murder Hornet, Paco.

They have a stinger that is 1/4 inch long and they can SPRAY poison out of that stinger if just stinging the fuck out of you hasn't made enough of an impression, and they can sting your ass multiple times and just fly off laughing.  The venom can cause kidney failure, and does cause your tissues to break down and liquify at the sting site, which is utterly horrible. They hunt in packs. Yes! And they live underground, taking over old rodent holes, like rat, mole and vole runs.  So now, I get to go around hunting up critter holes and vole runs and plugging those, which I've added to my gardening routine.

I've been stung by a ground wasp, which has the same kind of venom, just in a vastly smaller dose.  Now a ground wasp is a tiny, sad little excuse for a wasp the size of a house fly, but that sting raised a welt that spread all around my ankle and turned mushy, and then just kind of sloughed for a few weeks, which was not beautiful or appropriate. And it itched.  A murder wasp sting feels like having a hot nail driven into your leg.  Plus, you lose immune response the more times you're stung, per Wikipedia.

1. Who is out there in Asia dicking with the murder hornets and getting stung so many different times that they're losing immune response? 2. Presumably the people who go out and harvest the fucking things to be fried and eaten, because hey, let's eat it before it eats us.  I can kind of get with that sentiment, but I'd also be wearing a Kevlar suit while I did it, and I am in no hurry to apply for that job, so there's that too.

Here's another reason to police those little hornet nests you find around.  Murder hornets?  The big fuckers?  They scent-mark.  They go around scent-marking hornet and honeybee nests, and then they come back later in a pack when they're hungry and eat them ALL.  Having regular hornets flying around being assholes is one thing.  Leaving up multiple hornet nests, empty or not, with MURDER HORNET SCENT TAGS on them is tantamount to standing on the roof of your car and screaming  'Come sting the fuck out of me, vast murderous hornets, and then feast on my remains!'.

As if this weren't enough to stress my shit, Canada is on fire again, and we're in the middle of a heatwave/drought.  I wake up to the smell of smoke, the sky is yellow, everything an acre distant is buried in haze, and there is not a breath of wind.  Oddly, it's also incredibly humid, so after the sun goes down and the dew falls, it smells like an old rotten cellar hole outside.  Like the kind you find in the dank woods that has a gross puddle in one end?  That cellar hole. That smell.

I've been getting up early and doing all my outside work in the morning, when it's cooler.  I just speed - trimmed my umbrella alder this morning, trying to beat the heat, and the kid next door learned a lot of new swear words in English from me as I went around with the hedge trimmers, clippers and loppers like a maniac. That was at 7:00.  By nine in the morning it was 80f, and it's 86f now, which amounts to 30C and too goddamn hot everywhere else in the world. Not a breeze.

What do I have instead of a breeze?  The Four Horsemen of the Apocalypse in my driveway, bugging The Biker, roaming around like this is a public park, wanting to go in the garage and play with the air compressor.  The Biker finally chased them off.  Five minutes later one comes back and stands outside yelling 'Hey!' at the house for a few minutes.  What is up with this?  When you were a kid, did you go around bothering random old people?  No!  You avoided them because they would smack you with their canes and yell at you in Norwegian.

Right now I'm inside with the fans going and quilts nailed over the windows to keep out the heat, which works surprisingly well.  It's pretty pleasant in here.  I've got my kim chee going and there's tomatoes being processed, and I'm feeling like I accomplished something, which is nice, because I intend to spend the rest of the day doing exactly nothing.  And so should you.

Unless you live in Whatcom County.  Then you should go outside and clear all your damn hornet nests. The life you save may be your own, but more importantly, MINE.

Well,you nailed that one dear heart. Last week I was stung five times in my right leg by Yellow Jacket hornets while out watering my front garden. The bastards had probably been there for quite a while but suddenly decided to swarm this old broad like I was chopped liver. Currently, my leg looks like something out of a horror movie. Go ahead and Google images of 'multiple' wasp stings. On second thought, no don't do that...disgusting. The delightful young man I hired to remove the (hidden) nest gave me the satisfaction of letting me watch while he dispatched the Queen. She had managed to survive the poison...well of course she did, the Bitch. If Killer Hornets come to the northeast I'm never leaving the house again.

Fuck. And I thought the monster critters over in Australia were scary...

I'm with you on the poison question, too. Normally we avoid any kind of chemicals in the garden so the bees, ladybirds and spiders can thrive, but if I was faced with a psychopathic flying alien beast like that, I'd resort to napalm!

At least the two that I heard about got trackers on their butts so they can lead us back to the hive for annihilation.

You're welcome (from Canada)

Well, now you've sufficiently terrified me, even tho' I fully appreciated the Gallow's Humor sprinkled in to the grim reality that Nature is coming up with these Sci-Fi scary Creatures for Real! Here in the Arizona Desert we're tit deep in Killer Bees, so I just wonder what an epic battle it would be between Killer Bees versus Murder Hornets, tho' I don't really wanna know nor find out. Hopefully our Heat is enough they will avoid us if they're more comfy up North there in your neck of the Woods. It would be an incredible Favor if you would kill them all for us before they migrate here tho', just sayin'!