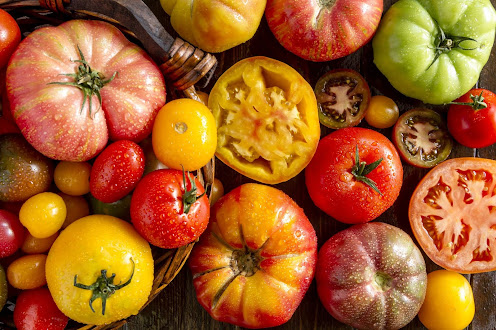 I have grown every single tomato in this picture.  I'm basically awesome.

This years' varieties were Black Prince, which is a saladette-sized tomato with a purpley-brick to mahogany color, and Early Beefsteak, which I suspect is held by Monsanto, but don't quote me on that.

The 'Early' line throw fruits which are red and round and apple sized on big, sturdy plants.  In the past I've grown Early Girl, Earlier Girl, and Early Boy.  All of them were disappointments in this climate.  They were prone to crack and blossom end rot, and didn't set a very robust root system, even though I practice deep setting, (where you strip off all the lower leaves and leave four on the very top and then plant the whole stem, leaving the leaves above soil level of course.)  They produced an average tomato, on the watery side, with a lot of seeds and very little 'meat' - and what was there wasn't firm at all.

Early Beefsteak, however, is an entirely different beast.

I have softball sized tomatoes out there on a beast of a plant with a root system like a fuckin' willow.  The fruit is solid, firm, with lots of meat, scarlet all the way through, and not at all watery. The flavor can become very sweet very quickly, and one day is the difference between tomato flavor and just too damn ketchuppy, so you pick them when they're firm and then let them go another day on the windowsill.  It is great when cooked. There are very few seed cells, and that's not by chance.  Big Seed Inc. does not want you saving those seeds and planting them for free next year.  I don't regret having grown it for an instant.  I am saving time on processing with these big old hummers, and they fit the bill.

I've grown Black Prince before.  Nothing about it is beautiful.  The plant is rangy and the root system is shallow. The leaves curl in the sun and get spotty in the shade.  The fruits will crack just from a heavy dewfall. They split, catface, grow odd protrusions and look ugly. Some will actually turn coal black; most don't. You cannot tell a ripe one from an unripe one because they generally come in all different shades of a color best described as 'Old Worn Out Brown Carpeting With Green Parts.  You have to go in and squeeze them and then pick the ones that give a little, once they've started to color up. They have a hide like a rhino, are more juice than meat and full of seeds.  Why do I grow it?

Because it tastes like the very soul of a tomato, astoundingly fine, and never varies.  I grow it to up the ante on whatever else I've got growing, because sometimes I'll pick a real loser (like 'Taxicab', a screamin' yellow tomato, which, while novel, was basically just a characterless, bland saladette that was half water.)

I like to grow a good, solid, big tomato for slicing into big ol' slabs and putting on burgers, sandwiches, or frying in olive oil and eating with a little salt. Early Beefsteak, Cherokee Purple and Brandywine all fit the bill. But mostly, I sauce and freeze my tomatoes.

Now, you take Black Prince and mix it with a Brandywine or Cherokee Purple, you've got Heaven.  Mixed with my Early Beefsteak, it brought a utility tomato up to excellence.

When I sauce tomatoes, I just seed them, run them through the food processor, and then bake the slurry at 275f in a 9 by 13 pan (or the next size smaller depending on how much I have, or even multiple pans on the racks) until I can smell them in the front room - at about the 45 minute mark - and then I stir it and let it go a little more until it's reduced by a third. I might give it another stir if I feel like it. With all that surface area exposed to the dry heat, this process goes fairly quickly, even with multiple pans.  Then I cool it and freeze it and done. Boom. Takes about three hours, no matter how full the oven is.

Why not reduce it on the stovetop? Because in the oven,  you don't get flies committing suicide in your sauce.

Yes I've tried a spatter screen.  You have to weight it down with silverware to keep the flies out because rural flies are some weight-lifting little fuckers and will fight their way into that hot tomato sauce to die. You also have to stir your sauce A Lot on the stovetop to keep it from scorching on the bottom even on the lowest setting because of all the natural sugars = spending five hours running in and out of a hot kitchen in late Summer because you're working with a deep pot with poor evaporation properties = NO.   Then when it's all done, you've got a dirty pot and spoon and auxiliary silverware, and the screen is all gunked up with syrupy condensate and you have to soak it in hot water and Dawn and scrub it with a brush and seriously fuck that.

Reducing it slowly in a wide, flat pan in the oven also carmelizes the top of the sauce just a bit, so that when you stir it, all the flavor gets deepened without getting scorched. This is THE way to sauce tomatoes, hands down.  Took me a lot of years to figure this out, and look at you, getting the benefit of my culinary wisdom for free, you lucky people.

What I am making here is an ingredient, not a final product.  That's why I don't use anything but tomatoes in my sauce.  I can thaw some out and jump in any direction from that point, and I always know exactly what flavor to expect.  This kind of plain tomato sauce is EXQUISITE in Indian dishes, and in a minestrone soup it is to die for!  Cream of tomato soup, beef stew, you name it - it even makes a fantastic 'Frappe Style' Bloody Mary!  It's a perfect way to control flavors, and it doesn't have that canned taste.

Those are some seriously good looking tomatoes you got there. I only grow short season beef steaks and Amish paste because I essentially live in the walk-in cooler section of the United States. A dissipated Hurricane Fred just passed through giving us several days of hot sticky weather (Fuck you Fred) which felt strangely unacceptable. I shall try your way of processing tomato sauce but remain concerned about the high suicide rate of your local flies. Ours just hang around polishing their nails while waiting for a plate of food to appear.

You should have your own TV show - "Cooking Fresh from the Garden with Steve"!

I have tried using ointment on my crack and blossom end rot but to no avail.

Camille: Around here, even short season tomatoes languish, and then leap in late July. I'll be bringing in tomatoes until October, and if I still have fruit on the plants I'll pull up the plants and hang them upside down in my shed and get vine-ripened tomatoes until the first week of November. Amish Paste is an excellent tomato. I'm glad you reminded me of that variety - I might put some in next year with a 'Mr. Stripey' which is an excellent yellow and green striped variety that you stand out in the garden and eat like candy, it's so delicious. As for flies, I am all for suicidal flies, as long as they don't end it in my tasty beverages or my damn tomato sauce!

Jon: I'd have to be on YouTube because of all the naughty language I use. And yes - flies are absolutely revolting. Particularly here in farm country, where you pretty much know where they came from and what they've been landing on, barf.

The Mistress: Please don't tell me you've got blossom end rot AGAIN. Have the pool boys change the water in your jacuzzi for fucksakes! At least get someone to hose down the oubliette.

Pah, tomatoes come from the supermarket in plastic cover. The only difference is that the tomatoes ooze out something, ha !