If I Buy The Yarn, Will Your Mother Knit Me A New Proctologist?

Sorry I haven't been around.  I picked up a quilting project that I put down about seven years ago and I've been all OCD on it since the last time I done bloggered.  It's a hand-sewn quilt, so it's been just thousands and thousands of stitches, and me mesmerized, and the floor next to me all littered with pins and bits of thread and shit.  Do I have pictures?  No I do not have pictures. QUIT BUGGING ME FOR PICTURES! I DON'T HAVE THEM! PLEASE GOD STOP!  THE PRESSURE! THE PRESSURE!!!! 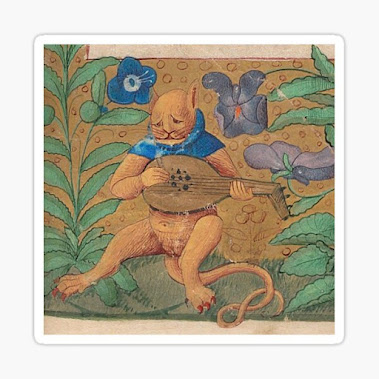 Looked up 'downtrodden medieval peasant'; found 'lute playing cat with a snatch' and here we go.

My primary physician has been bugging me to get my annual butt probe, which, at my age, is considered mandatory, and I've been telling her for two years now that I will once they get Covid figured out.  In return I get that placating attitude from her that folks give old people who are being unreasonable. I was not being unreasonable.  I was being someone who's learned that thoughtlessly granting your trust to people simply because they have a medical degree is naive and dangerous. Those are MY mucous tissues, and I'm guarding them with my life. 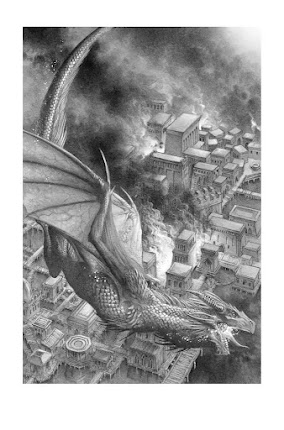 Then I got a letter in the mail last week from my ass specialist, the very man I was supposed to visit, that I have been going to for seven years now, saying that since his rights as an American were being infringed upon by being required, as a medical professional, to receive the Covid vaccine, he was forced on principle to to resign his practice, and hoped his patients understood. 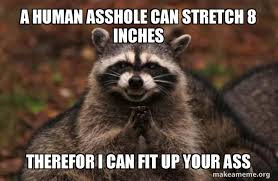 Looked up 'medieval asshole', found far too many images of assholes, liked this better, so here we go.

You know what I understood? That he should never have received a medical degree in the first place; and that his hurt feelings are clearly more important to him than his patients welfare.  This man actually decided to be a potential disease vector, and thought he was quite the valiant martyr for standing up for his 'rights'. What an asshole!

Haven't felt this bummed about being vindicated in quite awhile. I've been passing around his address to all the raccoons I meet, so let's hope for the best.

I sincerely hope that racoon does pay a visit up that particular arsehole!

We're having a similar bleeding-heart "boo-hoo-my-human-rights-are-being-infringed" kind of shit over here now the government has had the "temerity" to enforce our own National Health Service workers to perhaps - ahem - get the fucking vaccine that has been around all year without adversely affecting anybody, and not spread a lethal viral disease from infecting their patients!

It disgusts me that anyone who still refuses to do so can honestly say they "care" about vulnerable people. Jx

I was at the doctors last and was getting pestered for me to get my annual butt probe. So I did. Afterwards I found out it was not the doctor but another patient with a double personality posing as a doctor. Oh shit.

Absolutely adore the lute playing coochie cat. Might be a lot more fun and look better on my next updated business card instead of the typical 'vanity' Photoshopped pix my company insists upon.

Your former doctor is an asshole and deserves to be kicked to the curb. Nuff said, except no self respecting racoon deserves to be shoved up his arse. X

"his rights as an American were being infringed upon by being required, as a medical professional, to receive the Covid vaccine"

Cool. A man with principles. The main principle being "Me first ! It is my fucking "freedom" to pass goddam viruses to my patients, even when this risk can be minimised. Screw them arseholes ! It is my infection, and I have not only the right to get it - but pass it on as best as I can, ha !"

What I do not fully understand is the nature of this examination - it is not a colonoscopy, where they insert something and inspect your bowls, is it ? I understand that this is required only once in ten years. My doc pesters me to go finally to a specialist and have it done, he says it is "maximally uneventful". So I do not know what a yearly inspection should be good for, maybe it's an American special.

Talking about arses - Sadly The Mistress' collection of her readers' arses went down the electroonic orcus once. Won't a photograph do ? A high res image of yer arsehole, some Artificial Intelligence - et voila !

Love the image you used! Every 10 years some assjock gets to part my cheeks and take some photos. The prep is a drag, but the drugs used for the procedure are lovely! xoxo

Wot Jon said!
I have tried to get my head around why care staff and medics won't get the jab - and it's worried me slightly - as in what do they know that I don't? But I have put this out of my head, and I will still get my booster.
Sx

Mistress Maddie: I would love to believe that you're making a joke, but I have this nagging, perennial distrust of the medical profession that's keeping me from making the 'steaming flesh injection from a flaming porksword' joke.

Camille: Coochie Cat is notably awesome. I double dog dare you to put that image on your business cards!

63Mago: Here in the U.S., once you reach 45 (as I recall) most insurance companies require that you receive a yearly mammogram and colonoscopy. As for pix? You greedy man. I already shot you a picture of myself holding a kola of dank between my tits, that should be more than enough sexy for one Franconian!

Savannah: How do you get away with once every ten years while I have to spread 'em every damn year? Maybe they like my barking starfish more than yours? Blatantly unfair! Although I have to agree; the drugs are incredible. Last time they gave me an anti-anxiety, and honey, I had NO ANXIETY. I watched the whole procedure on the monitor and was all 'Oh WOW! That's me! That's inside me! THATS WHAT MY INSIDES LOOKS LIKE!" and all the techs were laughing because I was so tripped out. But it's truly amazing, seeing your insides all blooping away and lit up like Christmas. Amazing, and very pink.

Ms Scarlet: What do they know that you don't? Absolutely nothing whatsoever past what serves them first and best, and screw everyone else. That there are people like that in the medical profession scares the shit out of me.