For all you jazz dogs out there. 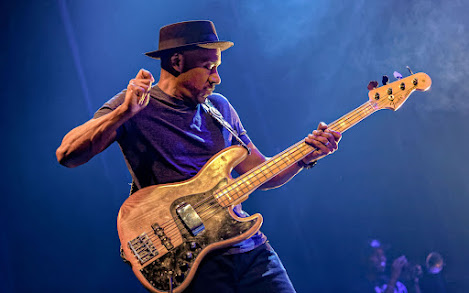 He's a generous performer.  He allows his ensemble to improvise and will step aside to let them shine while he backs their sound with brilliant, minimal bass stings.  Jazz doesn't come much finer than this stuff.  Look this guy up on Wikipedia - he's done everything!

The algorithms have concocted a wonderful YouTube channel for me.  It's got Al Blakey and the Jazz Messengers doing 'Moanin' ', Herbie Hancock playing 'Speak Like A Child', good standard Grover Washington Jr. doing 'Mister Magic', old as the hills and twice as dusty Dave Brubeck on 'Take Five', and the incomparable beauty of Oliver Nelson with Bill Evans playing 'Stolen Moments', a rave fave here at Apartmento el FirstNations.  And that's not all, but I'll spare you.

This is perfect rainy, windy night music, and that's what we've got going on outside now. I am soooo cozy.

My go-to for all things rare and sweet is Herbie Hancock. 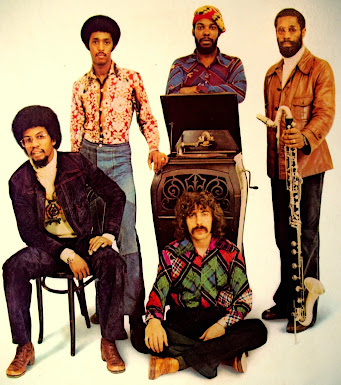 You've all heard the ferociously danceable "Rockit".  Well here they are, the gang from 'Future Shock.'

He's done some things that aren't to my taste but the man has never put out a bad song.  He's like the caffeine/chocolate/opioids of jazz - the man just makes everything better.  Even if he's just sitting on on keyboards, that piece is going to be 100% better for his presence.  This is a true fact, no bullshit.

Another man that deserves national treasure status is Stanley Clarke. I was just a poo-butt kid, but I knew quality when I heard it.

I saw him live years ago in 1976.  I can't even remember who I went with.  I'll spare you the tale; if you've been a-hangin' round Paul or Steve for awhile you'll have heard me go on and on about that concert before, so I'll just shoot you a link to his 1974 album:

And what is the first cut called?  VULCAN PRINCESS. T'Pring, you dumb bitch.  You passed up Spock for that?

ANYway.  Back to the present.

So I'm putting together my third Space Bedroom.

My first one was just a few movie posters.

The second one was way over the top.  Sort of Space-Goth. I painted my bedroom this super dark burned espresso color and then dotted it all over, and I mean All Over, floor, furniture, linens and ceiling, with glow in the dark galaxies and constellations, lovingly applied with a fine brush.  It was wicked bad and disorienting as hell once the lights had charged up the paint. I had blackout drapes, and the instant you closed the door those stars would fade up and daaaaamn.  I liked it.

This time I'm paring it down to some Trek collectables and some new posters and lobby cards.  I have a Deco chrome blender that The Biker turned into a table lamp for me, and - what?  Everyone in the future will have blenders that serve double duty as table lamps. Don't question my motives.

I found a nice cheap poster of 'Metropolis', the gold and black one, and that's on the outside of my bedroom door, like I'm twelve or something.  The Biker gave it the hairy eyeball this afternoon. I just said "God made man. Man made Maria." all portentously like you do when you're trying to impress someone with your knowledge of science fiction and shit.

Anyway, he has nothing to feel all holier than thou about. There's this.  When you figure the man subjected me to this atrocity: Yes it's Robert Williams, yes it's 21st century edge street-pop-car culture-West Coast, but honestly, it's huge and he had it hanging in his room as soon as you opened the door, and you know what; I just quit vacuuming in there.

yeah, that fucking thing, for years, until I took to keeping his bedroom door shut all the time?  He can just put up with lovely, soulless, intimidating Maria, the antithesis of everything good in this world.  I mean it's just pop art too. There really isn't that much difference, right?

I thought seriously about doing a 'Spocks cabin', and if Mr. Beast is still out there lurking, he'll remember the epic Trek House we both coveted, where the woman who owned the place had done the whole interior over to resemble the starship Enterprise set.  It had a Vulcan themed telephone nook. Now that's class right there.

And then I thought 'No, I don't own this place, and I'm going to go looking for that weird shimmery fabric or the expanded metal dividers. Life is too short.'  And they sell that shit online.  It's tempting.  But so is owning a 'Forbidden Planet' poster.  And a 'Gort and Klaatu' poster.  And a '2001' poster. And a 'Things to Come' (1936) poster.  And maybe some replica spaceships hanging from the ceiling on fishing line.  I did buy another bottle of glow in the dark paint....

I already bought a 'femme of the future' moderne dresser for a steal. That and my nightstand are going to be painted silver once the weather improves.

Yes. Everyone in the future will have chrome bedroom furniture and dual-purpose blenders. I'm just way ahead of the curve.

I'm not a huge jazz-funk aficionado, I must admit, but Herbie Hancock has produced some fine musical moments over the years.

As for home decor, we're more Art Deco than "Space Age" - and yes, we rent too, so can't go overboard on the style - and chrome, chrome and more chrome appeals to me! Not sure I could live with glow-in-the-dark paint nowadays, though (although when I was a moody teen I did have a royal blue bedroom, blue light-bulb and glow-in-the-dark moon and stars appliqués)... Jx

I know nothing of jazz funk. Nothing I tell you except Herbie Hancock. But I do remember the Trek house. My interior design theme can best be described as " is it supposed to look like that " 😳

As a teen I had the blue light bulb too!! Ruined my eyes.
Chrome needs to be cleaned more than once a month - I can't guarantee my commitment to that. I buy old, or old looking things that don't show the dust too badly. I have gotten too practical as I've aged. And boring.
Sx

I haven't yet moved on from last week's "Papa Was a Rollin' Stone."

Jon: Chrome! Deco chrome! We are huge Deco fans here at the El Apartmento! My BIL has a hyoooge collection of Deco stuff that I covet. I keep waiting for him to die...

The Mistress: Put down that Febreeze you pitiless woman. That manly musk has been missing from this place. *breathes deeply* aaaaahhhh. Smells Like Teen Spirit.

When I was a kid (12-ish) Mum and Dad had that poster of Maria on the dining-room door. My sister (9-ish) was suitably irritated/scared by the pupils being too small that she got a marker and made them ‘the right size’. When I finally saw the movie I thought her doing that was funny as fuck. One of the greatest sci-fi movies ever made, and my sister was like yeah but ur design is shit.

NoShitSherlock:OMG I THOUGHT I'D LOST YOU!!! Girl you just made my whole decade! Link me to a destination where I can bother you with my elderliness! -anyway. Your parents were persons of taste and discernment. Your sister...you know what, I have to sympathize with her. Maria's eyeballs are creepy as fuck, all pinned like she's covered in fentanyl patches. Of course if she'd fucked with my poster I'd have had to punt her over the goalposts. I mean I have limits ffs.
Love you and miss you, Sophie. You will always be my top coon.

I’m not anywhere interesting anymore! I found your blog when I realised that fb wasn’t fucking with me and you had actually packed it in. I’m so pleased to see you’re doing well. My sister to this day she has no time for sci-fi creepy-ass nonsense, although she has had a kid so the whole body horror thing is old hat for her now.

NoShitSherlock: I got booted off Facebook for having made a comment about Brian Johnsons' overly sensitive nipples. Yes Brian Johnson of ACDC. No I am not kidding. They took their censorship just one goddamn step too far and I said fuck dis action, fuck the Zuck, fuck this curtailment of my freedom of speech, and mostly, fuck the sad tired bullshit of Facebook during the Trump administration, and flounced out in a huff. I left messages with different folks to post my reasons for leaving, but the word didn't spread the way I'd hoped it would. I sure hope you stick around. I've enjoyed your intelligence and seeing you grow up, from a remarkable young woman to a full-fledged hot rockin' momma, I've always liked you and though of you as an important person and one whose opinions were worth considering. And I just don't go around liking people, Sophie, so yeah, you're honored, and you appreciate it because ME. I'd love a link to whatever social media you're using so we can catch up and exchange recipes and bitch. XXOOOOOO