The best way to get something done is to DO IT.  Had I taken my own advice I would not have the dental issues I have now, and I would not be scrambling to get them taken care of.

In my defense I must say that I've had some seriously shitty dentists in the past.  I won't even go into it.  Cap that experience (you see what I did there) with getting all four wisdom teeth taken out at once - and then getting 'dry socket' on all four craters! and yeah, I haven't been back for a few years.

I can date this specifically to July 4th of 2016, the date of The Ultimate White Trash 4th of July Celebration up in the foothills of Washington, in a tiny little town that doesn't show up on maps, where we rode on our Harley, and  1. taught small children to use firearms  2. used firearms ourselves, badly, 3. while drunk 4. set off many illegal fireworks 5. while drunk 6. set a sofa on fire, and a pool table,  7. while very drunk 8. drove up and down the street blasting funk and disco music while everyone else partied up on the logging stages all around us 9. while profoundly drunk 10. and I broke an incisor; which I then pulled myself, using a needlenosed pliers, 11. while SOBER.

The broken tooth happened right after I arrived at the party, and I proceeded to make my pioneer forbears proud.  Screw that tooth.  After all the kids had marvelled at it, I threw it into the brush and drank a bunch of vodka.

That's how much I hate the dentist.

I realize that it's my time; that women my age lose their back teeth and that losing your teeth when you're old happens, but it doesn't mean I have to like it.  This doctor specializes in dental-phobic patients, though, and I'm counting on that.  I will not be dignified and I will not put on a brave showing.  I will wince and freak and possibly cry.  BEFORE the dentist does anything.  This is my way of welcoming a new medical specialist onto my team.  Kind of like their initiation.  And after all, I have good insurance, and times are tough.  They'd BETTER treat me well.  At least, that's the kind of attitude I'm trying to encourage in myself.

Now look at this picture. 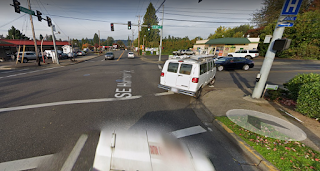 This is a picture of the very spot, including the arrow, of the place where my mother was standing when she saw her FIRST flying saucer.  (There were more, believe me.)  Imagine my chubby little mom standing right on that arrow, looking off to the left, up by the bar with the traffic lights on it, watching A Visitor From Space!

Imagine a real music hall yiddishe mama voice, and you'll have my mothers voice, although she was a New York Cat'lick.  "Aouw my gaaawd, theah it was!  An' I was just standin' theah right by the grass!  An I just looked up!  Right theah, and it was, oh it was hyuge and red and cigah shaped, kind of, oh, and people was just loooookin and looookin, and we all just loooooked..." and this would go on awhile.

Now this was back in her 'mystical' days, before she had her conversion experience, burned her Ouija Board and all her astrological books and got Jesus the way a racoon gets hit by a truck.  She would trot this story out to anyone who mentioned the subject, and since it was quite a subject around 1968, my mother became, unbeknownst to her, one of the 'cool' moms in the neighborhood because she would not shut her yap about this goddamn flying saucer.  Or cigar.

I was just going through Google maps, travelling around, and I thought it was really poignant that the arrow and the corner just lined up so perfectly, and that the picture itself could be anyplace in America, any anonymous corner, except for the fact that in 1968, my mother saw a U.F.O as she stood on that very spot!  Remember that the next time you're abducted.  Drop the name 'Helen Hartis' and maybe you'll get to skip that butt probe!

Unless you were looking forward to the butt probe.  I don't judge.

I always get my dental work down by UFO'S. My teeth are like steel lambchop. I, for some reason, feel violated orally...not sure what they used in my mouth, and some times now that you mention it, my ass is sore.

I hear ya on the back teeth thing. I have the lower right and upper left gone. Have two partial dentures and I hate them but gotta be able to chew my food, so I wear the upper one. The bottom one causes me no end of troubles, including just not fitting well without half a tube of Polygrip to keep it stuck down. It also snagged the underside of my tongue enough times to sever a salivary duct and cause a mucocele under my tongue, which I had to have removed last Sept. Great big incision under my tongue. Healed nicely, though.

I am totally calm and collected at the dentist. No bother to me at all. You'd think otherwise because of all the work I've had done (like 7 root canals, multiple crowns, two bridges... the list goes on and on... crap teeth runs in my family) but it doesn't bother me at all.

Hoping this dentist will be gentle and understanding for you!

GRRRRRR......dentists. Don't get me started. I haven't been able to chew properly since last July. The dentist wanted whip out 3 teeth - turns out my affliction wasn't tooth related, and now I'm in some sort of oral hell and I'm being prescribed cake.
Sx

You need to speak with Infomaniac Bitch, Normadesmond. She had a bad case of 'dry socket' too.

And Mr. Peenee had a dental issue he calls "Bone Hole."

I've thrown money at my teeth, in the form of several crowns, and I'm obsessive about the little suckers (actually, of course, the point of them is that I don't need to suck), to the extent that at my 3-month-delayed checkup last autumn, I was complimented at their loveliness. Tim doesn't feel the same way and he has gaps. He eats slow, nowadays.

Safari won't let me in here any more, so apologies for not visiting more often but you're considered threatening, sorry to say. I've managed, finally, coming via Chrome.

I'm "tonguing" my temporary filling as I type - counting down the days until I go back and have a proper one (14 to go!).
I only hope that all the metallic amalgam doesn't start picking up alien signals, ending up with me being abducted before then!

OhMyGawd! The MITM and I both need to go to the dentist, but I'll be damned if I even attempt a visit until COVID is gone, or at least until I've had my 2nd vaccine! Oh yeah, I fucking hate dentists, too! xoxo