Finally the electricians arrived to replace ALL the wiring in our house!  One more step toward TOTAL INSULATION AT LAST!

I'd always told my husband that we were running live 'knob and tube', which he did not want to hear, but then he can't get into the attic and I can, and it was pretty obvious up there since the remodeler didn't even bother to close the junction boxes.  I'm not a dumbshit ffs. 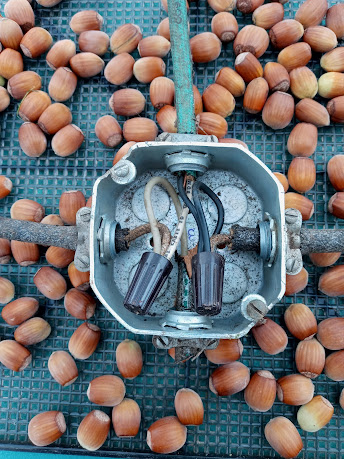 Presented here on a bed of Filberts because presentation is everything.

Behold!  This is the kind of horror that was up in the attic and all over the house.  The electricians were appalled!  More importantly,  I was vindicated!

That this house ever passed inspection before being sold was probably a matter of an inspector having driven by and going 'Yeah, it's standing,' and receiving his kickback.  This shit was illegal twenty-five years ago and it's illegal today.  The company that did the remodeling is notorious around town for his shortcuts and shoddy workmanship.  We figure, what the hell, it only has to last us until we go into assisted care.  We're throwing money at it now just to stay comfortable until then, and part of staying comfortable is not waking up on fire.

The kitchen and dining room are up and running, and we've been playing 'Outlet Roulette' for the past three days.  The power is glitching since we're on temporary connections until they can run new service to the house and replace the master fuse box.

Where is the fusebox?  Why, in my bedroom!  HUZZAH!

Still, the outfit we hired is really banging it out in record time.  Most importantly, they're running the lines through the attic instead of under the floor joists.  We flood, and it's only going to get worse over time, so we're planning ahead for the time when the floodwaters reach the actual structure.  Here's hoping that never happens, at least while we're in residence.

I have made many discoveries and had many core realizations during all this activity.  I discovered that a family of Gods' little creatures was living in my kitchen by hearing the sounds of an electrician gagging when they moved the counter out from the wall.  That was embarrassing as hell.  I did a record time deep-clean on that and apologized profusely.

I discovered that we own entirely too many tchotkes.  Entirely. Too. Many. And I discovered that all our furniture is really heavy, too.  That's the tradeoff for owning original Mid-Century Modern pieces because we are super cool and trendy here at Rancho FirstNations.  Yes I am bragging.

Core realizations?  I am not the housekeeper I used to be.  I used to be, as one woman noted years ago, The Hippie Martha Stewart.  I was very exacting about order and cleanliness.  Now, the combination of being really short and having crappy glasses has resulted in accumulations of crud that I simply didn't see until I had to move things around.  The stuff in my linen closet is aligned with geometric precision, but spiders, mice, and wildfire soot have added to the overall state of entropy despite that crucial detail.

Another core realization was that I have internalized the tenor of my social environment to the point of going to the trouble of hiding certain things from the gaze of the electricians, such as my copies of  The Autobiography of Aleister Crowley, Witchcraft In Europe, and the Malleus Malificarum.  Every one of these guys live here in town, and I'd rather be known for my garden than I would be for my reading material. (I have actually had problems with this before, when one of my daughters' friends told her mother what I had on my shelves and her mother forbid the kid from ever visiting again. Yeah.  We have well over a thousand books in our collection, most of it non-fiction, but no - the kid zeroed right in on the three eeeeeeevil titles and narked to her mom. The rumor went all over the school and straight to the parents: SSA's mom and dad are Satanists!!! which we are not.  Still, thanks, ya little shit.)

Still, as much of a nuisance as all this is, I am very happy despite my bitching and whining. We won't have nearly as many power dips and surges as we have had for years, and the likelihood of death by rodent - assisted fire will be greatly reduced.  Then the insulation will go in!! This Winter isn't going to be anywhere  near as hard as last Winter was.  I'm really looking forward to that!  And similarly, next Summer isn't going to be as rough, either.  My house will be a refuge from the weather instead of being at the weathers' mercy!  Imagine it!

I'm glad you are getting your electrical squared away! Not something anyone wants to go wrong. We need to deal with ours too, specifically in the kitchen. The overhead light works at it's leisure and not ours. I suspected mice have nibbled on it. We are still having a problem with mice and rats this year. Its really been something. I've never seen anything like it! Our guy retired and we tried a new company. They didn't seem to try to hard to block the entrances. They just want to charge us some $100 a month to come out and clear traps out of the crawlspace because we won't use poison. I've got my Red-Tail Hawk and Owl couples to think about! Not to mention the coyotes and bobcats.

Oh lawdy - electrics! We also have here in London the "eternal rat problem" - before lockdown, the sounds of "popping" electrical short-outs under the floor in the kitchen was a worrying problem, and (because of the COVID) it took ages before the landlady could get anyone out to look at it. I turned out that the rodents had gnawed through the insulation on two cables...

It's sorted now, and we have a new fuse box that hopefully will cut the supply to the offending area if the bastard vermin decide to take another bite.

The joys of living in old properties! Jx

Oh my, accused Satanists with Hellish Wiring that could burn the House down and be a Fresh Hell, you were living dangerously, weren't you? The Presentation was Lovely BTW, the Nuts being a very nice touch. We lived in a Historic Home that was built during the Wild, Wild West when they could build whatever they wanted without having any real construction experience, so our Beloved Old Homestead was likely a Death Trap in so many ways, but had stood over a Century when other Modern builds were literally falling apart from shoddy construction, so I don't know which is worse really? We Sold both the Historic, which continues to be a Labor of Love for the new Owner whose Restoring it...and the new build McManse which was constructed like a POS in spite of being considered Luxury Real Estate. We compromised by buying a Mini Farm built in 1980, sturdy and remodeled only 5 years ago, so they did all the hard stuff you're presently enduring in upgrading.

Phew! No more dealing with this kind of thing.

I'm curious, which of "God's little creatures" made the electrician gag so?

I have come to the realization that Martha Steward has a staff to do all the crappy work and she has lied to all of us! The Teutonic bitch! Enjoy your insulation and new wiring, sugar! That stuff makes a HUGE difference. xoxo

Hurrah. We are twinning again I am having windows sealed as they are leaking and stuff to make the place less damp . There are loads of your fans commenting on your facebook wondering where you are so I am glad to see you are well and kicking it. I worried a bit when I saw all the forest fires and stuff :-)

Also I quiet like the concept of rodent assisted death!

Proxima Blue: Thats the price we pay for being out here in the middle of farm country. EVERYbody has rats and mice, even the new builds. We put out traps, we empty traps, and I huck the little carcasses over into the field, where the crows take them away. Circle of Liiiiiiiiiiiiiiiiife...

Jon: Oh lawd, I know. The only new build I ever lived in was my parents house in the suburbs, where there were no bugs or critters chewing on the wires or shitting in the dishes. That was the last time I ever experienced that level of civilized habitation. Portland was cockroach central (brrr) as was Seattle; with mice thrown in as a bonus. Out here, everything on four legs that can find it's way into a house, old or new, when harvesting starts, will. And they will tear up the joint to show their appreciation!

Bohemian: I live in that 'Wild West' era house! The whole thing, from the original cabin structure to the add-ons, was home built and balloon framed. That will make insulating it easier, at least!

Inexplicable DeVice: A llama. Cuidado! Hay llamas! I think 'twas the flooding that brought them in.

Savannah: Well of course she did. But in her defense, she paid attention, she has superb taste, and she gets high with Snoop. (You know she does. I know she does.) I am and always will be a fan of Frau Stewart, the Terror of the Airwaves!

Beast: HOLY CRAPBALLS IT'S BEAST!
It's gonna happen, bud - we two are in tune with the cosmos, playing out our fate among the stars, the mighty Bulls who brook no household disorder!!!
You need to visit more!!!! XXXOOOOOOOO
(Are you the only one who paid attention when I said I was never, ever going back to Facewhore? I meant it!)

I know you know I love her and my linen closet was a testament to that devotion! Not to mention because she said, on record, that one of her greatest regrets was not being the guest host on SNL because her (fucking, my word not hers) probation officer wouldn't approve the trip!!! xoxo

If there are open metal lines you have to pee on them to find out whether there is a current.