Putting the 'dugong' back in Christdugongmas!

Good lord, the crowds out there!  The teeming hordes have all crawled out of their dens, pale as maggots, and descended on every retail outlet here in my part of the planet.  It's like a state fair, where all the weird people you've never, ever met, but who clearly live nearby, come shambling out of the forest like lost Innsmouthians, slavering after deep fried Twinkies and corndogs. 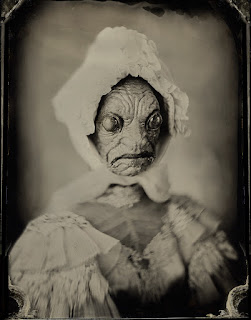 It takes centuries of inbreeding with fish-humanoids who worship Dagon to produce a grandmother like this, and dammit, she wants waffle fries with her fried twinkies.

I do not miss The Reddest Corner of the Bluest State at all when it comes to shopping.  Yes, the crowds were thinner, but they were made up of white folks busy policing everyone else's morals, 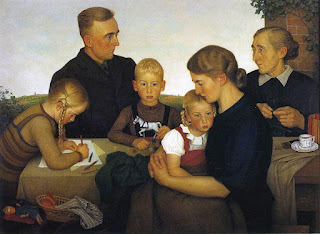 Look at the joy on those faces.  LOOK AT IT.

folks with too much religion wearing MAGA hats, and they had truck nuts on their vehicles. On a farm truck this form of ornamentation is barely excusable, but on the family sedan it's just heartrending.

I really have felt like a kind of social weight has been lifted from my shoulders here in town.  I live in an area with two colleges nearby, so there's a lot of diversity, a lot of young energy, and a huge out and proud LGBTQ+ community too.  Many, many hippies. Big pagan presence. Many, many people from places other than Holland.  It's wonderful!  Example:  I can exclaim 'Shit!' absentmindedly and nobody looks at me as though I'd just shot a loop of gut out my ass!  I CAN WEAR MY FRANKIE SAYS RELAX t-shirt and people laugh! And talk to me! About the Eighties! Not about how God disapproves of butt sex!

We've been doing a pile of necessary shopping amid all the holiday preppers.  Most of it's just been replacing things we lost in the flood, which was kind of boring (Oo, a blender.  Oo, a toaster.  Oo bedding.)  But now the bulk of that is finished, and we've been able to turn our thoughts more toward Christdugongmas and gifts and thank-you cards, and it's starting to be fun again. 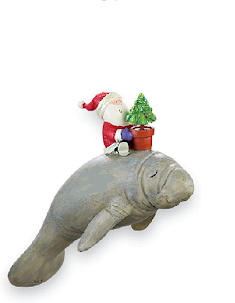 Retail is nice.  I have nothing against retail.  But thrift stores are more fun, and the thrift shopping out in this area of Bellingham is fuckin' nuts, y'all.  There are warehouse sized places, small places, weird places, smelly places, clothes only places, machinery and tool - only places, shit; I could keep going but you either get the picture, or you don't care.  I've picked up so many high-end items for so cheap lately it's stupid.  And that stock revolves, let me tell you.  Not a week goes by that they haven't all completely turned their inventory!

And here's something that kind of blew me away, now that I'm back in the new and improved, bigger, better, faster Bellingham I've found that in my absence apparently all of Bellingham has become a Designated Wildlife Corridor.  There are warning signs everywhere.  I've seen more of Gods lil' critters here in a week than I did in a month out Sumas way. Deer! Birds galore! The fattest, sleekest squirrels you've ever seen, like real American squirrels that need to go on a damn diet and stop wearing tennis shoes everywhere!

Back in 1985, when we first lived in Bellingham, there were the occasional deer, black bear and cougars (the Wilderness Death Kitty kind) roaming around at night right in downtown, and since it invariably follows that where there's deer - and there sure in the fuck are some damn deer  - 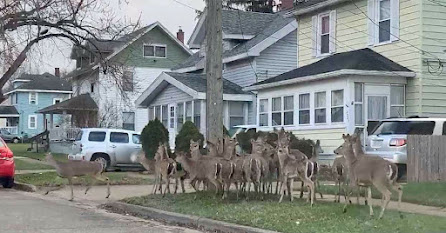 Yes. Not even kidding.  Like this.  Don't they look tasty? 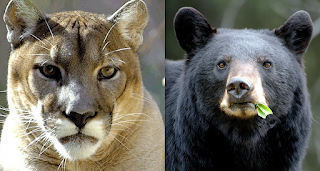 It's just like living in downtown Portland Oregon again! (sniffle)

And let me make the same parallel when it comes to nutty people.  I haven't seen so many free-range nutty people since I left Portland multiple decades of years ago.  (Don't make me count on my fingers, just move on.)  Portland back in the 1970's was overflowing with floridly nutty motherfuckers.  So too is Bellingham lo these many years later.  And the odd thing about the nutty population is:   if they're wearing a lot of pink?  Man or woman, they're meth heads.  I've had lots of people tell me the same thing, and it matches up with my observations. Apparently you ingest a certain amount of meth over time and bammo, you're weird as shit and in the girls' apparel aisle shoplifting tutus.  Meth heads love them some pink clothes.  Dora the Explorer-themed togs are au courant among the meth set, followed by Barbie anything and Glitter Girls. I do not know what this is about, but it's killed my urge to try meth once just to see what it's like. 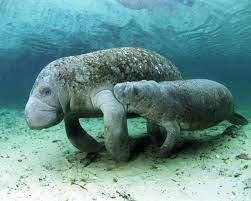 And remember the motto of Christdugongmas:  Don't chew on your mother, even if she's already dead.

I love Christmas, but when it comes to the shopping Im all Ba Humbug!!!

I don't have but 4 gifts to get, and generally have them done very early, one reason I enjoy the season so much. I refuse to get caught up and pressured into the consumerism. Just cooking and drinking for me. I mostly give baked goods or liquor out. And some of my Christmas wishes for several of you have already been fulfilled sugar plums.

And deer? I have swarms of them here. Two but sailed clear over my car tonight!!!! I thought they are trying to fly. They then cleared a 5 ft high plank fence. They all come down from the lake at lake. Course, the fox are out screaming then it becomes the nightmare before Christmas. But I adore them too.

Velociraptors and pink tutus? [Or even better, velociraptors IN pink tutus!] Dugongs and death kitties! Vintage shops and free venison! I like your neighbourhood already... Jx

Death kitties!!! I'm glad you're enjoying yourself! Have a wonderful Christmas!
SXX

I hope your new home is big enough for all the thrift stores you speak of?
And if one were to enjoy a late evening/night walk, what are the chances of being mauled by a bear or Wilderness Death Kitty? The most terrifying evening wildlife around here are owls - and that's just the screeches they make.


P.S. I'm now concerned that my five year old niece may be a meth-head...

The most terrifying wildlife round here, in ascending order, are a) the randy screaming urban foxes, b) the rats, and c) the people. Jx

This painting shows an arian, German family enslaved by the judeo-christian complex - whatever Rosenberg had to barf about. I tried to find the painter / author, but could not, but I know that I saw this painting before. Can you tell me please who did it ?

Mr Mago - that painting is by "one of the official artists of Nazism", Adolf Wissel. Jx

Thank You Jon, I was not sure about it, and I could not find it, I am simply too dumb to use the picture search thingy. Wissel is one of them, displayed in Munich etc. If one takes some time and looks carefully, one can see the "Blut und Boden" ideology jump out of the frame. The interesting thing is what they did after 1945.
Most careers went on undisturbed.

Mistress Maddie: I hear ya. We get everyone gift cards. Screw Xmas shopping! All the prices here literally JUMPED from one to ten dollars on December 1st. Now where's that holiday spirit? And I love deer too. Why we don't have foxes here I don't know...I've seen them out in the mountains, but I guess they're too smart to come down and mingle with the hoi polloi, hence 'smart as a fox.'

Jon: It's fun here! And colorful too, if you like 'sunset range' tones.

Ms Scarlet: You have a merry Xmas too, dearheart!

The Mistress: Back atcha baby. Quit slacking and get back online, too, and have a Happy New Year.

Inexplicable DeVice: See, that's mu biggest worry right there. So much crap! So little space! And as for wild animal attacks, yes, it's happened at least twice, and both times it was a black bear prowling around downtown Bellingham (that's where the highest concentration of food waste is.) People all over town have seen cougar tracks in their back yards, on the beach down by Puget Sound, and have reported sightings in several urban parks. So far nobody has been killed. Lots of cats and dogs go missing, though...

Jon: What about the muntjacs? I personally would freak right the fuck out if I saw a fanged deer. You just don't know what kind of move to expect out of a fuckin' deer with fangs, is my point.

63Mago: Wissel. I chose that picture carefully. I left an area that at one time back in the 1940's had the third highest Klan membership in the United States. And I do not miss that lingering odor, either.

We get very few Muntjacs round here, dear. Not exactly common inside the North Circular! Jx

PS If you go to settings, you can change the way your blog comments work by making the setting "Comment location: Embedded". That way, you can reply directly underneath a previous comment...

Merry Christdugongmas. I love that. So appropriate for this Outpost of Empire!
Glad you've been able to replace lost stuff and can concentrate on the dugongness of the season.
Cheers!

I hope you and the Biker had a grand Christmas!

I didn't know Bellingham had such diverse and interesting thrift stores! I love thrift stores! I should go up there to peruse sometime. I'm sure B-ham can bare to have one more death kitty in human form stalking about for a short time. To my Asian friends I'm a White Tiger, to my Indigenous friends I'm Puma spirit. Either way, don't antagonize the cat. Even the pink tutu-wearing meth heads instinctively know when to give me a wide berth. Hahaha.

What's with the sea cows though? Cute as they are, nothing says Florida to me like sea cows, but if they're only here for the cuteness factor, that works for me.

ProximaBlue: First woman in America who doesn't have a damn RAVEN as a spirit animal. You, madame, are a trailblazer!