A young couple moved in down the block and we got talking, and they admired my garden and said they were starting their own.  What should we grow?

I took them into the back yard where I have my raised beds full of divisions.  "Take your pick," I said.  "Everything here is extra and it will just go into the compost pile."

The new people right next door (Yay!  They aren't screaming lunatics!) have three little girls; six, four and three.  I have two beds right out in front on the parking strip full of pretty flowers so that kids will stay out of my yard, and this works like a charm, an absolute charm. I was out taking a walk around and suddenly the three little girls are all introducing themselves and talking all at once and picking flowers.  I got about one word in ten.

Suddenly the middle girl, just a beautiful little thing, like a Caravaggio painting, starts telling me "We had to move here because my mom and her boyfriend take drugs and they have guns and my dad had to move us out of there so we'd be safe..." and goes on to tell me a real horror story, right out of 999. No child abuse happening, but I now know way more than I ever wanted to know about my new neighbors. Apropos of nothing.

I was washing dishes yesterday when I had a realization about something that happened years ago.

I was twenty or more miles up on the logging roads, way into the Mt. Baker Wilderness area, and had gone past a sheer rock wall on my way to find a waterfall I'd been told about.  The only prints on the road are mine, and the animals.  Nobody had been up this way in awhile.  And I'm merrily driving along, alone, in a Buick, and I find the waterfall and there that is.  I goggle at the waterfall, and that's nice.  Time to go back.

A couple miles back down the same road I come to the same rock wall, and my way is blocked by a rock fall.  Not a colossal one, but big enough to present a problem.  There's rocks I can't move.  As I'm standing there planning my strategy I shout "Shit!" and listen to that go echoing up and down the valleys.

And two dudes come walking up out of the brush. Big smiles. Two ratty, scrabbly, scroungy, guys in track shoes.

We all look at one another.

"....Oh.  I guess ya need help, huh?" says one guy, and I laugh, and the three of us shove the rocks off the side of the road and down the hillside.  I thank them, and we all wave at one another, and I drive off and never give it another thought. There is always someone out poaching, or hunting, or hiking or what have you.  For example, the lovely cloud-capped mountain in the back of this picture is called 'Dead Drug Dealer Mountain' by the locals,  because when two drug dealers go up, only one comes back down. 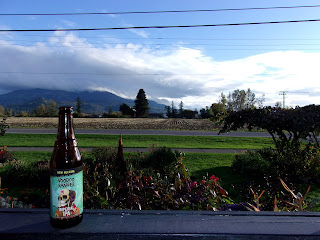 Yes, this is the view from my front porch.  Yes, that's a damn good beer.

It hit me, as I was standing there washing dishes, that I had been helped out by meth cookers.  Both of them packed; I clearly saw the pistols down the small of their backs, but this is bear country and that's not an uncommon sight. Had I been out hiking I would have had the same thing. No, the final clue was that both of them were wearing cheap track shoes instead of hikers, and both of them absolutely reeked of cat piss.  At the time I thought, well, guys out hunting aren't going to bathe, whatever.  But no.  They thought that they were going up to the road to meet their transporter, and what they met was a fat lady in a Buick.

I have learned three things lambchop.

1-your full of interesting stories. I could listen all day tootes
2-You have a talented green thumb
and 3- You highly recommend Voodoo Ranger beer. I love a good IPA.

I wonder why drugs or the people doing drug are drawn to that area? It looks like a beautiful area and quiet. I wonder if that's why?

Mistress Maddie: I looove it when you call me 'lambchop', ma petit choux!

Savannah: It's gotta be dumb luck. Maybe they didn't feel like digging a really big grave, is what I think!