I have had a...let's say, 'dramatic' relationship with my daughter since the time she hit puberty until she moved to De Sout'. 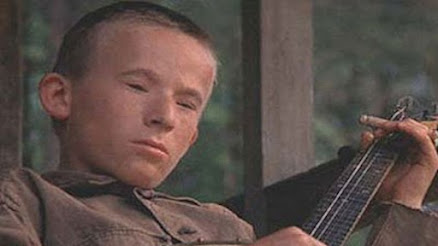 Not her, not her banjer. Not even her Sout'.  But I'm leaving it here because De Sout'.

I guess it's true that absence makes the heart grow fonder, because since that time we get along great.  (And to my vast amusement, she has turned into a huge Star Trek geek in her old age.  She used to be so embarrassed that I liked 'such a totally uncool thing' when she was younger. HA.) 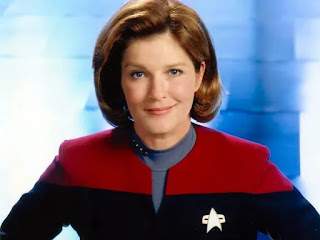 Kirk will always be My Captain, but Janeway didn't break the Prime Directive every other     episode, nor did she go around screwing everything in the damn galaxy.

Did I hit Turner Classic Movies first thing?  LIKE THE FIST OF AN ANGRY GOD!

Man I have missed my Turner Classic!  The first thing I did after The Biker insisted on getting us hooked into the channel, which he did with ill grace and lots of swearing because he and The Future are enemies, I landed on 'After The Thin Man' and watched it hard! I had a huge grin on my face the whole time!  Jimmy Stewart in one of his rare 'screen heavy' roles! Asta and Mrs. Asta! The sets!  The clothes!  Myrna Loy and William Powell!  Heaven!!! 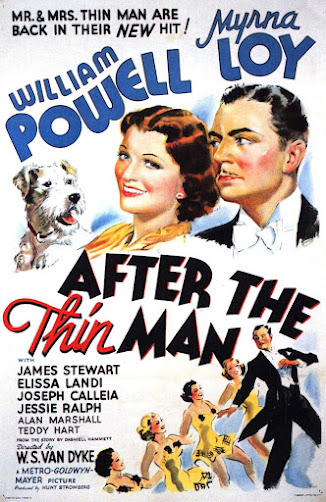 Back when there was still such a thing as True Elegance, Myrna Loy had that shit sewn up.  Her costumes in this movie are astounding!

Now I am about ready to cue up 'Blazing Saddles'!  Next?  'The Producers'!  Next? 'The Penalty'! Next?  'M'!  Next?  'Metropolis'! Next?  'A Funny Thing Happened On The Way To The Forum!'  Do you have any must-see suggestions?  Do tell down in the comment lounge!

When my mother was young, she was an usherette in one of the grand movie palaces in New York. Yup, my young, sparkling, beautiful mother in a domino hat with a tassel, a flirty little skirt, mesh stockings and a majorette jacket! 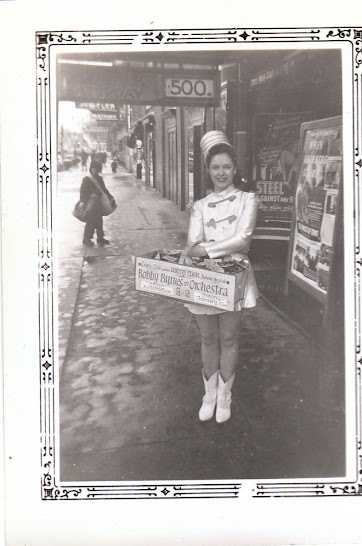 Not her, but  you get the idea.  Imagine a gorgeous Greek girl with amazing black hair, legs for miles, a cute figure; and all in navy blue with gold trim and high heels.  That was my mom.

She was a past master of Hollywood lore and had seen everything, starting with the very first silent films (back when you had to scrounge a penny selling old bottles to see 15 minutes of film shown on a white sheet in an alley.) She hung around the silents so much that she attracted the notice of a moviemaker, and had been scouted to be in an early 'Kiddie Kast' movie - she was a beautiful child, too. No, she didn't get a role. Her mother forbade it, and after knowing how Shirley Temple and other child actors were treated back in those days, I'm glad.

Her and I used to watch all the old movies when they came on television, and she would even stay up with me until midnight for Sinister Cinema if they were going to play a movie with one of her favorite old time stars.  She always carried a silk handkerchief with a lipstick kiss from Colleen Moore tucked into her purse for good luck all the years I knew her. 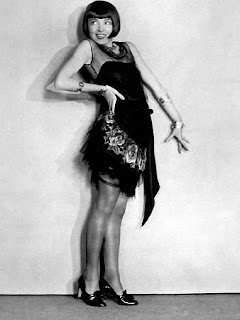 Colleen Moore, who looked like my mothers' identical twin back when this shot was taken. She was a V A M P, vamp!

She taught me about plot, film techniques, directors, different genres, she filled me in on all the Looney Toons and Merry Melody 'in' jokes and references, introduced me to old radio shows, even took me to my first live stage play - All About Eve with Don Ameche and Ann B. Davis!  She knew all the dirt, too. All that  scandalous stuff coming out about old movie stars? I already knew it all by the time I was ten.

Yes, I am that cool, thanks to her.

Favorite Movies, holy crap, where do I start? But first and foremost, your Mom must have been fabulous - all that and a bag of chips. And just for the record, I will stop whatever I'm doing to watch ANY movie with Myrna Loy. What a classy dame. Regarding my favorite recommended movies...here goes.

Camille: You and I are on the same wavelength! The only things I haven't seen on your list are the Godfather sequels, because the Godfather was such a fantastic movie I couldn't chance spoiling the memory! Man I love a mob movie, and the Godfather is the top of the heap.

Camille: Rosalind Russel was my favorite character in The Women. That top she wore with all the eyeballs on it always cracks me up.

How about basically anything with Robert Mitchum in it - as long as it is in b/w ?
I would very much like to see "Das Stahltier" uncut, but I doubt that it is possibel.
A "must see" is undoubtedly Kinder des Olymp / Les enfants du paradis, anything Hulot, Gance's Napoleon, Path of Glory, anything with the beautiful K.Hepburn, Visconti's Gattopardo, À bout de souffle and anything nouvelle vague, damn them French why did I not learn that language ?!

63Mago: You sir are a man of taste and breeding. I've only heard of 'Les Enfants' and in looking up the rest my curiosity is piqued! I'll start out with Les Enfants and go from there. Hepburn and Mitchum are two of my favorites - 'Holiday Affair' and 'Woman of the Year' stand out for me.