A lovely soft spring rain, a soft grey evening falling, and the sound of jazz in the background.  I am feeling happy and content.

It struck me yesterday as I navigated a couple of touchy social dilemmas that I really do have my shit down, and that it really is just chemical imbalance with me.  And I'm sorry to keep on banging away at the subject of my malfunctioning brain, but you'll take it and like it.  So there.

I was at the Senior Center Donation/Sale yesterday and a couple of women who have been less than my very best buddies in the past were there, and I felt nothing.  No nervousness, no aversion, no anxiety.  I was able to engage in conversation and be kind and polite, even when the one baited me about my difficult relationship with my daughter.  Numerous times.  Really trying to get my goat.  And I knew this, and it didn't matter a damn.

This would have fucking devastated me some years back.  Deliberate meanness for the sheer sake of being a bitch, choosing me as a target and using my personal life like that - that shit, even so small and so petty would have bit deep.  As it stood, I came home and the Biker and I laughed about it.  And that laughter, my friends, is a blessing.

The Biker is really on the 'Schoolie' bandwagon.  See, that's what 'The Kids' are calling school bus conversions, and what the hippies used to call 'a bus full of hippies'.  He has all these different shows he subscribes to and follows the progress of each conversion avidly.

Now children, I do not see my Biker doing a full on Bluebird School Bus conversion in this lifetime, period.  He is 61.  Neither do I see myself living in a confined space where I not only do not have a separate room to retreat to, but where I cannot stand fully upright.  We live in Recreational Vehicle Purgatory here, Vacationland USA, where old RV's go to be refurbished and re-sold.  I would so much rather get an actual, purpose built RV - nothing obscenely huge, just, say, Divco sized. 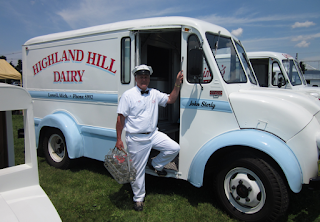 And it would have to be something that I could drive too, because...he's 61.  So I'm just keeping my eye on the situation and ready to forestall any rash purchases.

I swear to God some of these things are being fitted out like luxury tanks, with marble counters and full 2x4 construction.  How would you move down the road?  One good side wind and you'd be looking at dirt!  Not to mention gas mileage.  Now of course some of these are going to be parked for good, I know that.  But some of these people, usually young couples, are building for the fuckin' ages, man, expecting to roam the roads of this great nation of ours, and it just doesn't work that way.  We see a lot of these conversion units up in our neck of the woods, and there is nothing sadder than two hipsters trying to back a school bus into a campsite, and then get it levelled.  Or trying to make it up Mt. Baker to one of the snowline camps.  Mr. School bus was never meant to go up large mountains.  Particularly not a damn school bus with  marble countertops and stainless steel full sized appliances.

One thing an old school bus is really good for is growing dope.  Of course that's legal here now, so those dank smelling old busses are being hauled out of the undergrowth with 'For Sale' signs in the algae covered windshields.  And they are being snapped up as soon as they get hauled to the side of the road.  People are buying them to live in permanently, parked, home sweet home.

The tiny house thing is growing here.  And I blame that on the housing boom and Covid.  The Biker works with people who actually live in retrofitted garden sheds.  Yeah, it's cheap, your bills are low, you sneak in under a lot of rules, regulations and taxes, but damn, a single dude coming home to a garden shed...that's grim.  And as you know, I lived in a garden shed for awhile.  I can attest to the fact that it is in reality a very grim lifestyle, except when it hails, and then it's loud, but kinda neat.

The robin is back.  Come to find out the instant these little shits fledge a nest full of chicks they go right on and start another family.  Some robins have three different families going with three different hens, which means that robins have somewhat elastic morals, but really have that 'cranking out the offspring' thing down pat.  Unfortunately it means that cock robin is spending 90% of his time super jacked up on testosterone, which causes him to attack his own reflection because he is being a dude with way too many things going on in his little birdy life.  Someone should do something. That's what I think.

Put black paper across the window on the outside to end that robin shit!

School bus makeovers and people living in sheds? What a weird world we live in. Jx

PS The ongoing "Robin saga" is going to end up like one of those interminable Japanese or Indian historical epics at this rate. Never-ending...

the tiny houses, sheds, converted school bus things are not big around here. if I were single, I would not mind a smaller/less cluttered tiny house.

Mistress Maddie: Mads, darling, that would entail a full blackout of all windows, including our cars, and I'm sorry but I refuse to live in WWII conditions because of a thrush.

Jon: Tiny/Alternative housing is a huge thing here. It started back in the 1960's with the hippies, and there's still communes up in the hills, and kids growing up in Tipis and old furniture moving vans - not squalor, just...the flotsam and jetsam of the Love Generation. As far as my robin saga goes, it's starting to look more like Beowulf than Genjii.

anne marie in philly: YOU come here and try to find a robins nads! They don't have them! Birds have cloacas! You have to literally evert the whole butthole-exit-orifice of the bird in order to tell if it's a girl or a boy in a lot of cases, which makes me stop and wonder how I know so much about bird assholes.

The Mistress: Hey, I play to the cheap seats. Take away your own conclusions. ;)