Got my medications adjusted and the difference between one day and the next is absolutely dramatic!  I am feeling normal again, or as normal as I get, and I've got my motivation and span of attention back too!

What kind of freaks me out is that everything I'm taking now is an antipsychotic.  It's a new noun for my ongoing mental drama. Psychosis.  Not just another pretty word. 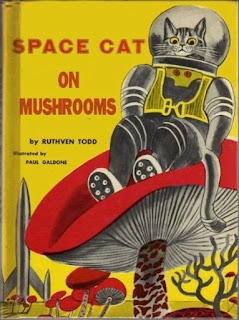 Frankly I am having a grand old time.  Some times a medication change can feel like immanent destruction of all life on earth.  This?  Well, I feel, um...different, and this will go on until I get adjusted to the new chemicals in my brain.  I'm a little woozy (read: baked.)  You know what; after the past couple of weeks?  I'll take legally baked.  Yes I will.  I deserve it.  I weeded the living Hell out of my garden beds today, and didn't think about death, suicide, avian flu or anything negative whatsoever! 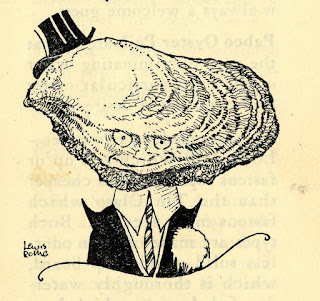 Mr. Swanky Oyster approves of them legal pharms, yo.

I have a robin that is bound and determined to beat it's brains out on my windows.  It's the male robin (a thrush here, not a cute tiny birdie like in the UK) and he's jacked up on testosterone and territoriality. 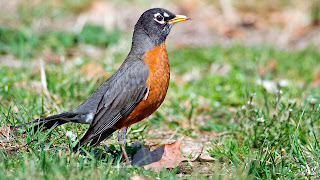 He sees his reflection in the window and long story short, I had to construct a thing out of plastic jugs and set it next to the window in hope that he gets freaked out by this plastic golem and quits bashing into my fucking front picture window.  He sits on my front railing, squaring up for his next sally, and opens the pod bay doors just as he launches himself glass-ward. Like bashing into my window starting at 7 A.M. isn't bad enough, he's got to shit up my front porch.  And smear up my window!

All birds are greasy.  I don't know why a songbird would be greasy, but they are, and this goes for any bird that might smack into your window.  They leave your window looking like someone threw an order of french fries at it, which is, frankly, icky.  I had to clean the railing, the porch, and both huge windows, and the glass was top to bottom bird smears - the greasy prints of wings, feet, beak, tiny feathers.

One arts and crafts project later, and a lot of water and a squeegee, and I hope like hell he gets the message.  This doofus is hitting that window full tilt boogie.  It sounds like someone is literally throwing this poor bird at the window as hard as they can, over and over.  Maybe he's given himself brain damage or something.  I have noted a distinctly crazed look in his eye - and he's a big, bright, shiny male with all his mating characteristics super prominent, like a caricature. Like a 'hood robin.  Like a 'Just got out of two years in prison' robin. 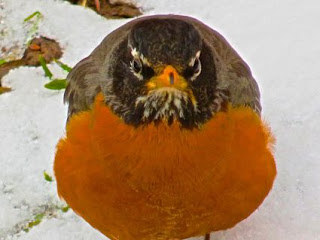 One of us is going down, boy, and it ain't gonna be me, reflection robin!

See how pronounced all the white markings around the neck and particularly the eyes are on these robins?  That's what happens to you when you are crazed on testosterone and you are a robin.

The females are distinctly more muted in coloration, and they stick to the shrubs and lower branches, or pluck at worms nearby, and are probably kind of embarrassed by this behavior.  His job is supposed to be making a nest, not smacking himself into his own reflection.

If I left this go on long enough she'd eventually come up onto the porch with a gleam in her eye, and they'd have a flustering, midair disagreement, he'd get his head pecked, and he'd get over himself and go out and gather nesting materials.  And be perfectly happy to do so, until he catches a glance of what he thinks is another male robin trespassing on HIS territory.  THIS MEANS WAR. Male robins will tear big old chunks of feathers out of one another in the springtime and crash in midair and fall to the ground and fight; they're in it to win it.

In this idiots' case, it's his reflection.  Man, he hates that bastard.

You need to give that "Robin" some of your meds! Jx

meds are good for you.
glad you are getting some help and relief.
yeah, that robin could use some legal pharma too.