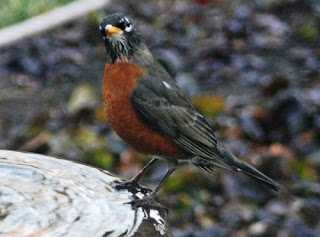 "For I say unto you - The path of the righteous man is beset on all sides by the inequities of the selfish and the tyranny of evil men!! Blessed is he who, in the name of charity and good will, shepherds the weak through the valley of the darkness. For he is truly his brother’s keeper and the finder of lost children. And I will strike down upon thee with great vengeance and furious anger those who attempt to poison and destroy my brothers. And you will know I am the Lord when I lay my vengeance upon you!!!!"

I have had it with this Robin.  Four days of this fucking robin bashing itself against my windows, and the fucker just moves to another window until I make another mobile out of random plastic bottles or stacked containers. My garden has just come into it's Springtime colors, and what do people see?  Weird dangling strings of plastic containers hung in random places, swaying in the wind.  I imagine they're saying "That poor woman. Someone should say something."

This morning, bright and early, the stupid little fucker was bashing itself into my kitchen window.  There is nothing remotely attractive, nest building locale-wise, about the area around my kitchen window!  But no, Dumbass Robin caught sight of that sneaky bastard Reflection Robin and it was ON!!!!  I mean, I woke up to this shit!  My kitchen window looks like someone did a texture coat on it with dirty margarine and used a dead robin as a swab, blat, blat, blat, all over the thing.

Maybe this robin just plain hates my house.  Or maybe it sees my house as a refuge for dastardly robin invaders who cannot be defeated.  I don't know.  What I do know is that this is one durable fucking robin.

I mean it.  I cannot believe that this thing can fly after what he puts himself through, but he does.  I'll rap the glass sharply, and he'll peel off, and then sit there at his distant perch all aggro and glare at me. 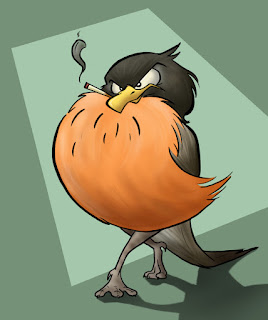 I wish I had a camera so I could show you how gooned out on testosterone this animal is.  I stood in the window and made shooing motions, rapping on the glass, and the little fucker just glared at me from the roof of my shed. Every dominance display you'd see your average barnyard rooster put on, this robin is doing. Puffing out his chest.  Flaring his wings. Holding an upright stance and giving me the side-eye the whole time. Leaning in like he's going for my throat. 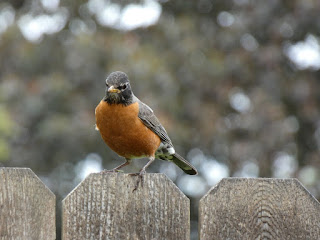 "I am beaming pure hatred at you with the power of my MIND!"
You see?  This is the kind of shit I have to put up with.  That right there ^^.   Listen. I own this house, motherfucker, don't come around all...menacing me, or...whatever, you idiot.  You're the size of an orange.
And all while this was going on, a little chickadee had caught sight, and was so - I'm guessing - fascinated, that it began to creep closer to Dumbass Robin just to check him out.  Hop, hop, pause.  Hop, hop, closer, pause. 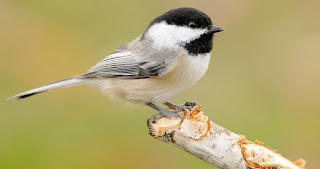 No bigger than a spool of thread, but fully capable of appreciating stupidity when he sees it.
This chickadee (also a male, also in fresh mating plumage) eventually made it to within three inches! of Dumbass Robin, while Dumbass Robin is wholly focusing the rage of one thousand suns on the elderly woman in the kitchen window beating on the glass with a spatula.  That chickadee just watched. Right overhead Dumbass Robin is calling me a butthole, and a poophead and telling me I'm ugly and stupid and a fatty fatty two by four or whatever curses robins use, and this little, tiny bird is just considering it, like, 'Damn.  I've seen some stupid in my time, but...damn."
Here's the punchline.  After all this chest-beating and name calling? This robin is going to nest in my Arizona Spruce just like it does every year.
Every. Single. Year.
Posted by Steve. Because 'Steve' is almost as nice a name as 'Paul'. at 1:33 PM

CHRIST, WHAT A DUMBASS BIRD!

This ongoing saga is hilarious!

I reckon that little chickadee is just waiting for the stupid robin to finally break its stupid neck, so It can feed on its corpse.

And sugarplum, I thought I was the only one with a robin doing this. Every morning since being at my mothers for Easter, a robin every morning does the same thing on the side window in the room I stay in. Stands on the air conditioner and jumps at the window. Goes on for about two hours.

Who the hell needs sleep? And they say mourning doves are dumb....

The Latin name should give it away: Turdus migratorius. We have a Turdus over here - T. merula, aka Beaky the Bastard! Beaky has never attacked my house though. Mind you, he has had a go at gouging my eye out...

I thought (and still do today) that it was hilarious.