A Walk Down Memory Lane

And if I do say so myself, and I do, parts of it are worth a read.  In fact, I'll throw a few up here.  This is one of my favorites.

I have no idea if Bill T was really related to us. What I remember is that he was supposed to have been my grandmothers' second cousin, so that's how we referred to him and his wife.

He was a nice old guy. He used to come over to our house quite a bit, his wife in tow, and play cribbage with my mom and her friends until the wee hours. Every hour or so he'd slip off outside to the trunk of his car where he had a bottle of Canadian Mist stashed and sip on that while he stood in the driveway and admired the stars.

His wife's name was Leota. 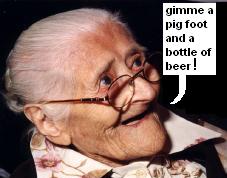 She was 5000 years old, had eight hairs left, weighed maybe 80 pounds and stood four feet tall.
Smoked constantly. Sometimes she'd have a cigarette going in each hand and one in the ashtray. We would find more of them smoldering away all over the house, long black foul things melting a line in the countertop or the arm of a chair, lying on the wool carpet in the middle of a glowing patch of nap.

Little Leota wasn't much for conversation. The complete lack of teeth was a barrier, as was the advanced senile dementia. Being perpetually pickled in vodka didn't help.
You have to stop and consider that for a moment. I can guarantee you she wasn't driving down to the liquor store even before the Altzheimers' set in because she couldn't drive and wouldn't have been able to see through the windsheild anyway. Where was she getting the stuff?
Every morning, Bill would get her up, run her through the tub, get her dressed, 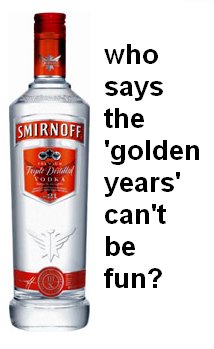 shovel some Malt-O-Meal down her (very occasionally Maypo...she refused to eat anything else) and then set her in a chair out on the porch with her fifth of vodka and let her wave at the cars going by.
This was how a lot of poor, older people coped with a loved one's dementia, and still do.
She was loved. She was cared for. And as far as I could see she didn't have a bad life at all. What the fuck, you know?
__________________________

Now Bill and my mom would get playing Crib and nothing could stop them. They played like demons. My dad and I weren't big card players, and we would have had to have been real hot shots to keep up with them anyway, so dad napped on the couch and I hung out in my room listening to records.
Dad could fall asleep anywhere, anytime. And when he did, more often than than not he would have really interesting dreams. I grew up with it so I didn't notice so much but it could really freak a visitor out. "Gahno farah muld gahyub! Call Jim!" he'd shout, with his arms waving around randomly. If it was coming from the couch, you ignored it.
Leota would watch the card playing and smoke. Occasionally she'd giggle. No reason, just joie d' vivre. Other times she'd come out with a brief statement and end it by saying Ha!
"You horse you, get that ol' cat! Fan room the store. Ha!"
Evenings at my house could be interesting.

The only thing she ever contributed regularly to the conversation was this kind of a verbal tic. She'd WUP.
Just out of the blue. No reason. She'd just be sitting there smoking quietly and suddenly out would pop 'WUP!'
Some days, you'd only hear one every two or three minutes. Other days she'd be wuppin' all over the place.

Sometimes she'd come up missing during the summer, when we kept the doors open. But all you had to do was be very quiet for a few minutes, and then off in the distance you'd hear 'Wup!' and you'd follow that. My parents were rather impressed when I showed them this discovery. You'd find her over in my Grandma's yard, looking over the fence at the neibors having a barbecue, take her by the hand, everyone would wave 'bye', and home you went, wuppin' all the way.

One night I was lying on my bed reading and listening to the intermittent 'Wups' coming from the kitchen when I was struck by a bolt of inspiration so hard it hurt my brain. Inspirations like these came frequently the year I was thirteen.
I crept down the hall into the entryway, where I was hidden from the view of anyone in the kitchen, except Leota.
Leota went 'Wup!'

Then she said 'Wup!"

And she replied 'Wup!"

Everyone playing cards at the kitchen table was totally oblivious. Leota was having fun. I was having fun too when dad caught me.
He thought it was hysterical. I mean, yeah, he sent me to my room, but he was laughing.

An hour later I happen to glance up towards the living room and there's dad on the couch, peeking over the easy chair towards the kitchen.
'Wup!" said my dad.

The ensuing silence was so thick you could cut it!

"Wup!" came from the kitchen.
"Niilo! Now stop that! That's not funny!" yelled my mom.

You couldn't help but like Leota. She was in a happy, simple place, like a (really really wrinkly) baby (who smoked) enjoying a sunbeam. 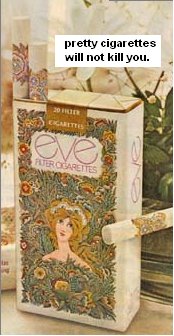 Now, ninety-nine times out of a hundred Leota was happy to watch the card players; but sometimes she wanted a change of scene. However, because she had a form of Tourettes' that caused her to chirp "WUP!' at regular intervals like a smoke alarm with a failing battery, she was fairly easy to ride herd on.
The thing was, you had to be paying attention. She would go into closed rooms and stand quietly in the dark, nothing evident but the ember on her smoke and you'd never know she was there until you happened to hear 'wup!' float out from behind the door.
Once in the bathroom I heard a cheery 'wup!' coming from the cabinet right next to where I was sitting and about died of a heart attack. We found her in the basement standing under the metal laundry chute, wupping away, entertained by the echo.

This is what happened the very last time she visited:
One November afternoon, everyone was sitting around the kitchen table, my mom and all the other card sharks, partying it up loud and happy, knocking back the 7 and 7's. As usual I was avoiding all this by hiding in my room.
My mom came knocking on my door. "Leota's gone. Is she in here?"
Nope.
Since it was cold, and I was the kid, I got sent outside to look for her while everyone else staggered around the house hooting 'LeOOOOTaaaa....'
Me, I glanced around close by, listened for her, didn't hear her, and promptly put all thought of her completely out of my mind. Evidently everyone else did too, because when I returned they were all pretty surprised to see me. "Where'd you go?" asked Mom.

I needed to hit the Ritz. The half bath was for the card players, so I went down the hall to the master bathroom.
Knocked on the door. Nobody answered. I opened the door.
I found Leota.

Everything except the toilet, oddly enough.

The entire bathroom was covered in shit. And so was she.

She had a smoke going. She smiled at me toothlessly from where she sat on the bathmat. 'Wup!' she said.

Complete disaster. Yelling, buckets, throwing things out the bathroom window onto the lawn, people running in and out of the house brandishing Pine-Sol, playing cards on the floor, forget it. Total chaos.

I was gone when it happened, but I understand Leota got her very first shower that day at our house and didn't care for it much. She went home in a bathrobe. She got to keep it.

I was outside at the time. My parents put me outside. They were pissed off because I wasn't helping. I wasn't helping because I could not stop laughing and I couldn't walk. I laid on the back stoop with the tears streaming back into my ears and lost my mind, man; I howled. It was not my finest moment.
Yes I know that lacks class. But I was 13 years old. I had no class. 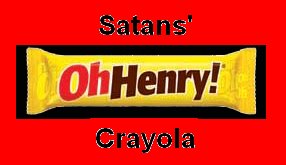 Thanks for sharing! I liked reading this!

JFC! I remember those cigarettes too; I think I smoked them in college (72-76). so whatever happened to leota?

While born and raised a Yankee gal, I've always admired the Southern creed of "We don't hide our crazy people in the attic, we bring 'em right down to the living room and show 'em off" Not sure if Leota was a southern gal, but I do love the reminisce and story you told. WUP!

Like Camille, I immediately thought that if Leota wasn't Southern, she should have been.